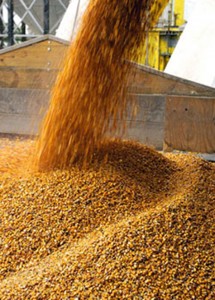 Corn – Corn is the number one ag commodity grown in the county. Farmers grow corn on nearly two-thirds of the farmland amounting to 202,200 acres with an annual value of $149 million. The 2020 corn yield was 191 bushels per acre.

Soybeans – Soybeans are produced on one-fourth of the farmland comprising 113,000 acres. The annual value of soybean production is $65.5 million. The 2020 soybean yield was 58 bushels per acre.

Cattle – About 23,000 beef cattle are marketed annually in the county with a value of $32.2 million.

Small Grains – Hay, wheat and oats are the small grains raised locally. These crops are raised on about 11,020 acres and have a market value of $3.9 million.

Other Livestock – Dairy cattle, sheep, goats, and other livestock account for $3 million in county livestock production.

Specialty Crops – Other crops grown in DeKalb County include: sweet corn, apples, pumpkins, raspberries, strawberries, and other fruits and vegetables often sold at orchards, farm stands, farmers’ markets and at local supermarkets. Christmas trees also are grown locally and sold at farms. The value of these specialty crops is $3 million.