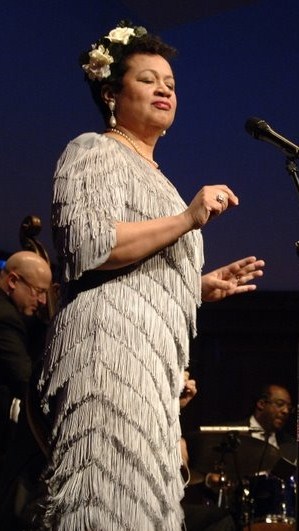 Mardra Thomas is known for her realistic portrayal of Billie Holiday in concert and on the theatrical stage. This true-jazz vocalist is bringing her show to Farm Bureau on Monday, April 1.

Costumed in a vintage gown with her signature gardenias, Mardra looks and sings the part of this iconic jazz vocalist. She takes you back to 1959 impersonating Billie Holiday with songs that highlight the era in which she performed including her first big band experiences with world known bandleaders such as Artie Shaw.

Mardra’s voice is well suited to showcase Holiday’s sculptured phrasing that stamped a signature style on jazz singing. She appears in theaters, concert halls and premier clubs all across the country. She recently produced, directed and performed “Chicago Trilogy” at the Atlanta Black Theatre Festival.

Last year Mardra was nominated for the 2018 Chicago’s BTAA’s Lena Horne Award Best Leading Actress in a musical for her performance of Billie Holiday at Evanston’s Fleetwood Jourdain Theater in their production of “Lady Day At Emerson’s Bar & Grill.”

Accompanying Mardra will be her husband Reggie Thomas, on piano. He is Coordinator of Jazz Studies at NIU, on faculty for Carnegie Hall’s Jazz National Youth Orchestra and is a member of The Count Basie Orchestra.

Farm Bureau members are welcome to attend this musical program in the DeKalb County Farm Bureau Theater at 1 p.m. Before the program, Farm Bureau Prime Timers will have their monthly luncheon at 12-noon in the Farm Bureau Auditorium. Lunch fee is $7, payable in advance by March 26, at the Farm Bureau office.