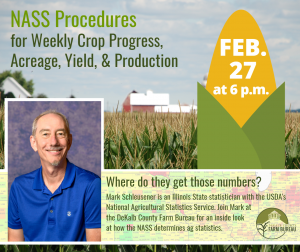 Mark Schleusener started working for USDA’s National Agricultural Statistics Service (NASS) in 1984 in Washington, D.C.  After a short while, he transferred to Lincoln, NE and worked there for three years.  He worked in Jackson, MS for 3 years, then Madison, WI where he got a Master’s degree in Statistics and was married to Jeanette.

Mark and Jeanette moved to the DC area in 1994.  He worked in the Research Division for 18 months and then transferred to the Survey Methods Branch where he focused on the Objective Yield surveys and analytical tools for surveys. He was promoted to the Section Head for the Commodity Surveys Section within Methods Branch.

After 8 years in DC, Mark and Jeanette moved to Springfield, IL where Mark had the job of Deputy Director for the IL Field Office of NASS.  In 2013, Mark did a one year Temporary Duty assignment in St. Louis leading a group of data analysts as they worked on the 2012 Census of Agriculture.  Since November of 2013, Mark has been working in Springfield, IL as the State Statistician for Illinois.  Mark enjoys golf, gardening, and going to Broadway shows with his wife, Jeanette.

Mark can be reached at mark.schleusener@usda.gov