British Bulldog Winston Churchill was one of the most influential people of the 20th Century.

Hear the story of the life and career of this larger-than-life character as portrayed by Terry Lynch for Farm Bureau Prime Timers on Monday, June 6 at 1 p.m.

Lynch brings history to life with Churchill’s participation in the Boer War as a military journalist, to his time as first Lord of the Admiralty, his career in Parliament, and finally his becoming British Prime Minister in 1940.

Winston Churchill saw England through some of the darkest days of World War II.

Lynch returns to Farm Bureau for this entertaining and informative program. He is a nationally known actor who specializes in historical portrayals. He and his wife, an educator, own their HFK Presents business, which provides history programs for adults and children. 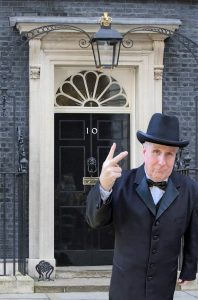