These three words define DeKalb County Farm Bureau’s journey. The organization’s founding principles were to improve the tilth of the soil and ultimately crop production. In time the organization progressed by establishing business ventures, including laying the groundwork for an enterprising company to produce hybrid seed. Finally, the organization’s success is evident through the designation as being one of the top county Farm Bureau’s in the state and achieving many accomplishments. 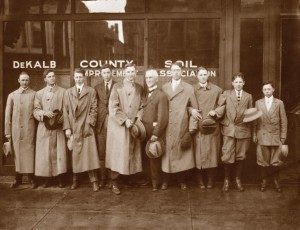 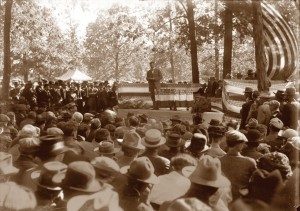 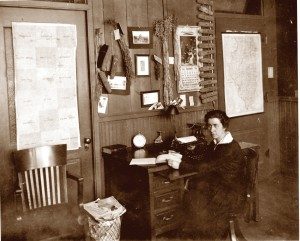 In the early 1900s farmers were concerned about the county’s slowly declining soil fertility and had an immediate desire to produce better yields. Farmers’ Institutes were popular and provided experts to lecture about new theories in farming, but lacked in practical applications in the field.  To solve this problem an idea surfaced in DeKalb County to hire a permanent farm adviser along the lines of the county agent program used by USDA in other parts of the country.

An enterprising group of farmers, bankers and newspapermen lead the crusade to hire a full-time farm adviser and form an agricultural organization, the DeKalb County Soil Improvement Association (forerunner to Farm Bureau), dedicated to improving soil and crop production.

Another meeting was held January 20, 1912 to finalize the new organization and garner a broad base of membership support.  A few months later, on March 27, the DeKalb County Soil Improvement Association (SIA) was incorporated. Dillon Brown was elected the organization’s first president. Henry Parke was the first secretary-treasurer and would become known as the “Founding Father of Farm Bureau.”

In a speech with county newspaper editors Parke said, “We have a great cause to work for, that of making DeKalb County the banner county in the state. Let us all pull together – the editor, the banker, the farmer – and secure for DeKalb County that prize, which surely will reward us better farmers, larger yields, higher land values, better roads, better schools, better industrial conditions and a higher standard of living.”

Eckhardt’s office was located on North Third Street in DeKalb. The association would conduct its board and leadership meetings at the Pierce Trust and Savings Bank, 308 W. State St., Sycamore.

To finance the farm adviser, membership dues were collected from farmers in each township, as well as receiving support from bankers. Also, the DeKalb County Board of Supervisors pledged support with the stipulation that Eckhardt manage the county’s “poor farm” and be used as a demonstration plot.

Eckhardt provided recommendations on improving the soil with crop rotations, through the use of barnyard manure and naturally occurring minerals such as ground limestone and rock phosphate.

One of the first commercial enterprises of the association was to purchase bulk amounts of limestone and pass the savings on to the farmers. Next was purchasing high quality clover seed. Then Eckhardt began experimenting with corn seed varieties and open pollination methods resulting in improved yields.

In 1914 the Smith-Lever Act was established creating the federal county agent law, which created the Cooperative Extension Service.  DeKalb County chose to remain independent but later reached a compromise wherein the Soil Improvement Association would work in conjunction with the Extension Service. However, it maintained its autonomy and control of its adviser program.

On June 18, 1917, the SIA created a separate corporation to assume the commercial enterprises, the DeKalb County Agricultural Association.  As the demand for the seed business increased along with farmers’ requests for farm adviser services, the directors of both organizations determined a larger home was needed.

The SIA bought the Old North School at 320 Fifth St., DeKalb in July, 1918. The SIA sold part of the building to the DeKalb County Agricultural Association in exchange for stock in the company. This laid the groundwork for the financial success of the Agriculture’s Association’s future hybrid seed business which, in turn, would provide revenue for the SIA’s programs in the decades to come.

Succeeding Eckhardt as farm adviser was Thomas H. Roberts in 1920. He assumed the position for 11 years and was followed by Russel Rasmusen. Later, these two would make great strides in corn hybrid research for DeKalb Ag.

In 1926, the name of the Soil Improvement Association was changed to DeKalb County Farm Bureau and its mission expanded to provide farm services, plus education and information for members.

The organization entered into several business ventures to benefit agriculture and boost the economy such as a livestock marketing association, a farm management and record keeping service, soil testing, a grain export company and a meat processing facility.  Affiliated companies, FS and COUNTRY, formed to offer members farm supplies and services, as well as insurance coverage.

Farm Bureau responded to the plight of American agriculture during the past century, through the early years of promise, through two world wars and several economic crises. The organization embraced farm issues and its leadership lobbied for legislation supporting agricultural interests.

Today, DeKalb County Farm Bureau is the premier agricultural organization in the county that boasts a membership of 6,200 members. Focus areas include: farm business, legislative and local issues, agricultural literacy, information and education.

The county Farm Bureau offers a multitude of services for its members from scholarships to farm safety programs and health screenings, family events and agricultural meetings.

Farm Bureau serves both rural and urban people who are interested in the well-being of agriculture.  Often referred to as the “voice of agriculture”, the organization maintains that through Farm Bureau, farm and city people work together to strengthen agriculture’s role and influence as a vital part of our local economy.